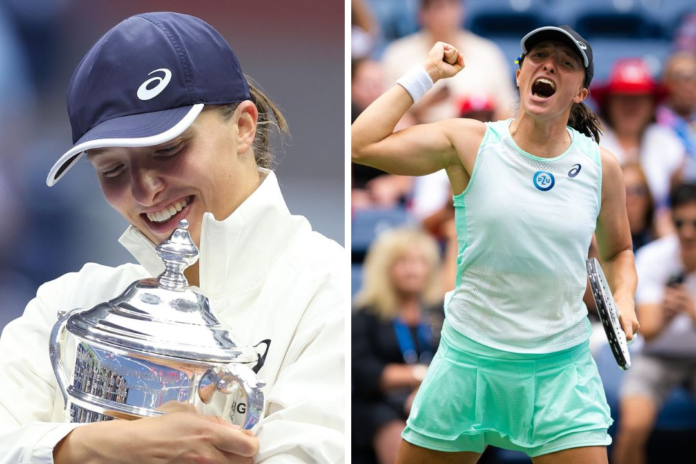 Even before the U.S. Open women’s final began, Ons Jabeur sensed she was in trouble against world No. 1 Iga Swiatek.“Iga never loses finals, so it’s going to be very tough,” Jabeur had said ahead of the final.Swiatek, the 21-year-old from Poland, was seeking her first major title on a hard court after capturing two of the last three French Open titles and posting a 37-match winning streak earlier this yer.She did so in impressive fashion, winning eight of the first nine points against Jabeur en route to a 6-2, 7-6(5) victory that made her the first Polish woman ever to win the U.S. Open. Swiatek, the first No. 1 seed to reach the women’s final since Serena Williams in 2014, is now an astonishing 10-1 in finals, having won all 10 without dropping a set.Swiatek will end 2022 having won two of the year’s four majors — becoming the first woman since Angie Kerber in 2016 to win multiple majors in a calendar year — and clearly entrenching herself as the best woman in the world. Her 57 match wins this year are by far the most on the WTA Tour. “For sure this tournament was challenging,” Swiatek said on court. “It’s New York, it’s so loud, it’s so crazy. So many temptations in the city. So many people who I have met who are so inspiring. And I’m so proud that I could handle it mentally.”Swiatek will take home $2.6 million with the trophy (”I’m pretty glad it’s not in cash”) while Jabeur earned $1.3 million. For Jabeur, a native of Tunisia, it was her second straight loss in a major final after she lost the Wimbledon final to Elena Rybakina in three sets. She will move to No. 2 in the world on Monday, but Swiatek still has more than double Jabeur’s points.In winning her third major title at the age of 21, Swiatek proved beyond a shadow of a doubt that she is not just a clay court specialist.“She proved she’s not only a champion on clay, but a champion on hard courts as well,” 18-time major champion Chrissie Evert said on ESPN. “She No. 1 in the world, and she played like a No. 1.”In the first set, Swiatek jumped out to a quick 3-0 lead, winning eight of the first nine points. Jabeur got the break back but quickly gave it right back when Swiatek aggressively attacked with a forehand winner up the line for 4-2. She then took a 5-2 lead when Jabeur swatted a forehand volley long on game point. Swiatek took the first set when Jabeur hit a backhand into the net to end a rally.Swiatek consistently hit her ground strokes deep in the court, making it hard for Jabeur to play her trademark game of changing pace, hitting slice and mixing it up.“Ons hasn’t been able to play her creative game that she loves to play,” Evert said.After the first set she asked her coach Issam Jellali what to do, and he advised her to try to move forward.But things didn’t change much. Swiatek earned another quick break for 2-0 on a two-handed backhand winner up the line.Things began to get a little wild inside Ashe during the second set, with fans screaming out during points and it unnerved both players. Jabeur had a chance to break for 5-4 when fans yelled out on several points. But Swiatek held from 15-40 down to take the 5-4 lead with a 101-mph service winner.With Jabeur serving at 5-6, 30-all, she sailed a forehand long, bringing Swiatek to match point. But she fought it off and brought it to a tiebreak.
In the tiebreak, Jabeur lost 5-of-6 points on her serve, and Swiatek won it when Jabeur sailed a forehand deep on the second match point.“I really tried but Iga didn’t make it easy for me today,” Jabeur said. “I don’t like her very much right now but it’s OK…I know I’m going to keep working hard and we’ll get that title sometime soon.”With all of the attention on Serena during the first week of the Open, Swiatek was able to fly under the radar a bit as the world No. 1.“I was actually thinking about that every time I basically watched Serena,” she said. “I have never been in a situation like being No. 1 and being in this tournament, so it’s hard for me to say.“It’s hard for me to compare, but yeah, maybe a little bit it took a little bit pressure off me. But for sure just not playing well before also took some pressure off.”

Swiatek also credited her sports psychologist Daria Abramowicz with helping her mental game.“The work we’ve put with Daria for sure helped,” she said. “Right now it’s just easier for me to actually logically think what I can change. And I feel like I have more skills to do that than one type of way to play.“So I’m pretty happy that it changed because I think that’s basically the most important thing on the highest level.”For Jabeur, she has established herself as the first Arab and first African woman to reach a major final — even if she has come up short twicThere was a large contingent of fans wearing shirts and hats from Tunisia, and Jabeur was greeted with a loud ovation upon her introduction.Much as African-American players like Venus and Serena Williams, and most recently Frances Tiafoe, inspired younger players of colors to pick up a tennis racquet in the U.S., Jabeur hopes to have the same impact in Tunisia and beyond.“I’m just really hoping I can inspire more and more and this is just the beginning of so many things,” Jabeur said.