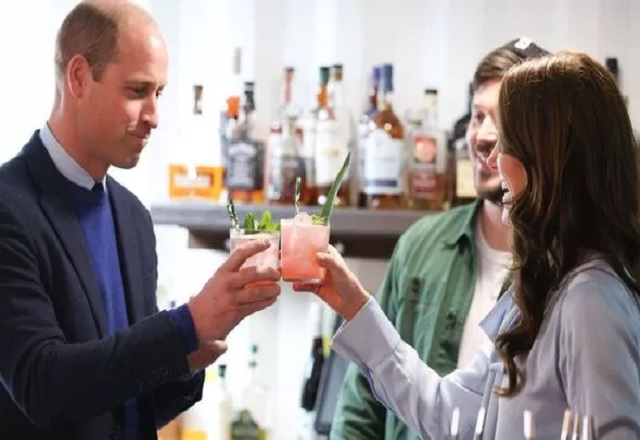 The royal couple visited a charity and a food market in Belfast and greeted well-wishers who had gathered to catch a glimpse of the new Prince and Princess of Wales. The official Kensington Royal social media accounts posted a compilation video of the day out featuring the couple making cocktails, taking selfies with supporters, and meeting their canine fans.

Instagram user @arae1001 praised their work and the social media video by saying: “I love that you’re connecting to a younger crowd! Such a great video.”

The couple focused on mental health awareness as they met volunteers who have had mental health issues and are working to help others.

Suicide Prevention charity PIPS welcomed the royals as they began their day of engagements.

Prince William and Kate Middleton spoke to staff at the charity about their work preventing suicide and self-harm following a rise in those seeking help following the coronavirus pandemic. PIPS set up an art therapy session for the couple to partake in which they painted pumpkins alongside vulnerable children who are receiving support from the charity.

They also packed up ‘Little Boxes of Hope’ which the charity distributes to those in their care to help them adjust after the charity has helped them and to assist in their recovery.

The couple were welcomed by Tina Black, the Lord Mayor of Belfast and Sinn Fein’s Belfast North MP John Finucane.

Royal fans expressed their love of seeing the royals in Northern Ireland and reiterated the strength of the bond between Ulster and the monarchy. User @greenrabbitdesigns said: “Thank you for visiting Northern Ireland…come back soon, you’re always welcome here in this part of the UK.”

Meanwhile, @elaine.allen.3910 wrote: “We love you. We can be Irish and British at the same time.”

Following the visit to PIPS, the royals tried their hands at mixology as they went behind the bar at Trademarket, a street food and retail market in the Northern Irish capital.

As the couple went head-to-head to create a cocktail, royal fans said on social media that they are “the ultimate power couple” and “rock stars” as their Twitter page asked who was better at making cocktails. The market focuses on ethical produce and the removal of single-use plastics to make it more environmentally friendly.

To conclude their busy day, the royals then went to Carrickfergus to talk to mentors at Carrick Connect, a charity helping teens who are struggling with emotional or social difficulties.

Following the day of engagements, which saw the Prince and Princess highlight issues close to their hearts, the couple said on their Instagram account: “Thank you for having us, Northern Ireland!”