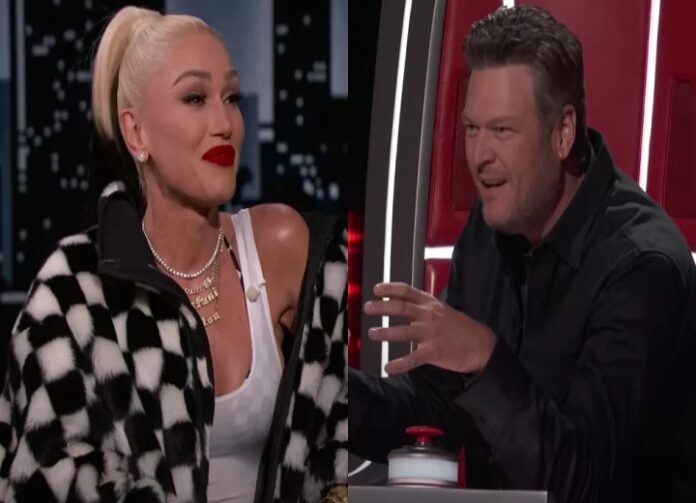 Leave it to The Voice coach Blake Shelton to accidentally cause a scene. While the longtime TV personality likes to engage in on-set antics, he recently found himself making quite the rookie error in the middle of an audition.

It all started when Voice season 22 hopeful Cara Brandisi took the stage to sing a country rendition of Taylor Swift’s “All Too Well.” After a few seconds, Blake and fellow coach/wife Gwen Stefani immediately hit their red buttons to see the face behind the voice (pun intended). After the two went back-and-forth about whose team Cara should join, Gwen tried to persuade the NBC contestant with a heartfelt message.

“Your lane is something that I’m a fan of. I was born in the ’70s. I listened to all kinds of singer-songwriters,” she said on the show. “I love storytelling. I love just putting your heart in a song and being able to relate to something that somebody went through and then letting the vocal take you there.” Gwen continued: “I don’t think that it matters about genre as much as it matters about heart, and musical is the vessel to that. I would love to work with you.”

As she wrapped up, Cara didn’t get the opportunity to respond because it was at that very moment that an alarm on Blake’s cell phone accidentally went off. Upon the realization that he had just ruined a heartfelt moment during the audition, the room erupted into laughter.

“Um, Blake has to take his medication,” Gwen joked as John said, “It’s nap time for Grandpa Blake.” But as the “No Body” singer later clarified, the quip was a little more on the nose than expected. “She’s actually not kidding — she set that alarm for me on my phone.” While the country superstar appeared apologetic for the ill-timed interruption, Voice fans watching from home didn’t quickly forget the incident. Many folks took to the comments section on YouTube to share their thoughts.

“When Blake’s phone rigging, that’s the most funniest moment grandpa Blake, i love [you],” one person wrote. “Blake’s alarm tho and his reaction,” another added.

Though it’s unlikely Blake’s mistake cost him a potential competitor, Cara did eventually choose to join Team Gwen. What’s more, now she knows that she’s got a fan in the veteran coach!