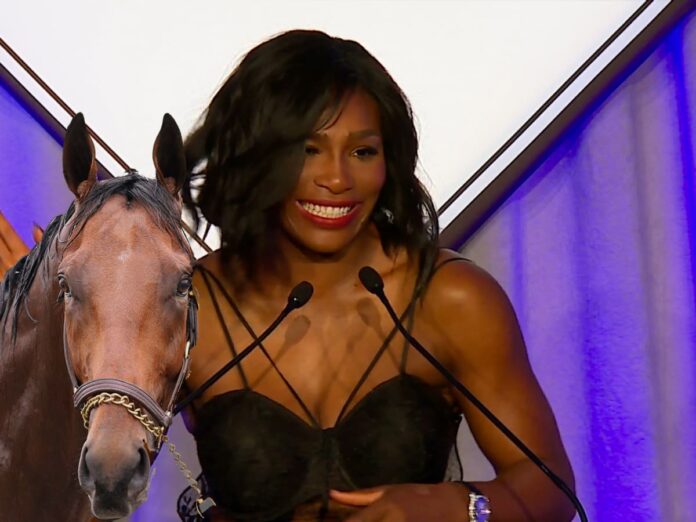 This morning, my daughter, Olympia, who turns five this month, and I were on our way to get her a new passport before a trip to Europe. We’re in my car, and she’s holding my phone, using an interactive educational app she likes. This robot voice asks her a question: What do you want to be when you grow up? She doesn’t know I’m listening, but I can hear the answer she whispers into the phone. She says, “I want to be a big sister.”

Olympia says this a lot, even when she knows I’m listening. Sometimes before bed, she prays to Jehovah to bring her a baby sister. (She doesn’t want anything to do with a boy!) I’m the youngest of five sisters myself, and my sisters are my heroes, so this has felt like a moment I need to listen very carefully to.

Believe me, I never wanted to have to choose between tennis and a family. I don’t think it’s fair. If I were a guy, I wouldn’t be writing this because I’d be out there playing and winning while my wife was doing the physical labor of expanding our family. Maybe I’d be more of a Tom Brady if I had that opportunity. Don’t get me wrong: I love being a woman, and I loved every second of being pregnant with Olympia. I was one of those annoying women who adored being pregnant and was working until the day I had to report to the hospital—although things got super complicated on the other side. And I almost did do the impossible: A lot of people don’t realize that I was two months pregnant when I won the Australian Open in 2017. But I’m turning 41 this month, and something’s got to give.

I’ve been reluctant to admit that I have to move on from playing tennis. It’s like a taboo topic. It comes up, and I start to cry. I think the only person I’ve really gone there with is my therapist

I have never liked the word retirement. It doesn’t feel like a modern word to me. I’ve been thinking of this as a transition, but I want to be sensitive about how I use that word, which means something very specific and important to a community of people. Maybe the best word to describe what I’m up to is evolution. I’m here to tell you that I’m evolving away from tennis, toward other things that are important to me. A few years ago I quietly started Serena Ventures, a venture capital firm. Soon after that, I started a family. I want to grow that family.

But I’ve been reluctant to admit to myself or anyone else that I have to move on from playing tennis. Alexis, my husband, and I have hardly talked about it; it’s like a taboo topic. I can’t even have this conversation with my mom and dad. It’s like it’s not real until you say it out loud. It comes up, I get an uncomfortable lump in my throat, and I start to cry. The only person I’ve really gone there with is my therapist! One thing I’m not going to do is sugarcoat this. I know that a lot of people are excited about and look forward to retiring, and I really wish I felt that way. Ashleigh Barty was number one in the world when she left the sport this March, and I believe she really felt ready to move on. Caroline Wozniacki, who is one of my best friends, felt a sense of relief when she retired in 2020.

Praise to these people, but I’m going to be honest. There is no happiness in this topic for me. I know it’s not the usual thing to say, but I feel a great deal of pain. It’s the hardest thing that I could ever imagine. I hate it. I hate that I have to be at this crossroads. I keep saying to myself, I wish it could be easy for me, but it’s not. I’m torn: I don’t want it to be over, but at the same time I’m ready for what’s next. I don’t know how I’m going to be able to look at this magazine when it comes out, knowing that this is it, the end of a story that started in Compton, California, with a little Black girl who just wanted to play tennis. This sport has given me so much. I love to win. I love the battle. I love to entertain. I’m not sure every player sees it that way, but I love the performance aspect of it—to be able to entertain people week after week. Some of the happiest times in my life were spent waiting in that hallway in Melbourne, and walking out into Rod Laver Arena with my earphones in and trying to stay focused and drown out the noise but still feeling the energy of the crowd. Night matches in Arthur Ashe Stadium at Flushing Meadows. Hitting an ace on set point.

My whole life, up to now, has been tennis. My dad says I first picked up a racket when I was three, but I think it was even earlier. There’s a picture of Venus pushing me in a stroller on a tennis court, and I couldn’t have been more than 18 months. Unlike Venus, who’s always been stoic and classy, I’ve never been one to contain my emotions. I remember learning to write my alphabet for kindergarten and not doing it perfectly and crying all night. I was so angry about it. I’d erase and rewrite that A over and over, and my mother let me stay up all night while my sisters were in bed. That’s always been me. I want to be great. I want to be perfect. I know perfect doesn’t exist, but whatever my perfect was, I never wanted to stop until I got it right.

To me that’s kind of the essence of being Serena: expecting the best from myself and proving people wrong. There were so many matches I won because something made me angry or someone counted me out. That drove me. I’ve built a career on channeling anger and negativity and turning it into something good. My sister Venus once said that when someone out there says you can’t do something, it is because they can’t do it. But I did do it. And so can you.

If you watched King Richard, then you know that when I was little, I was not very good at tennis. I was so sad when I didn’t get all the early opportunities that Venus got, but that helped me. It made me work harder, turning me into a savage fighter. I’d travel to tournaments with Venus as her hitting partner, and if there was an open slot, I’d play. I followed her around the world and watched her. When she lost, I understood why, and I made sure I wouldn’t lose the same way. That’s how I started to move so fast up the rankings, because I learned the lessons from Venus’s losses instead of the hard way, from my own. It was as if I were playing her matches, too. I’m a good mimic. Growing up I tried to copy Pete Sampras. I loved Monica Seles, and then I studied Monica Seles. I watched, I listened, then I attacked. But if I hadn’t been in Venus’s shadow, I would never be who I am. When someone said I was just the little sister, that’s when I got really fired up.