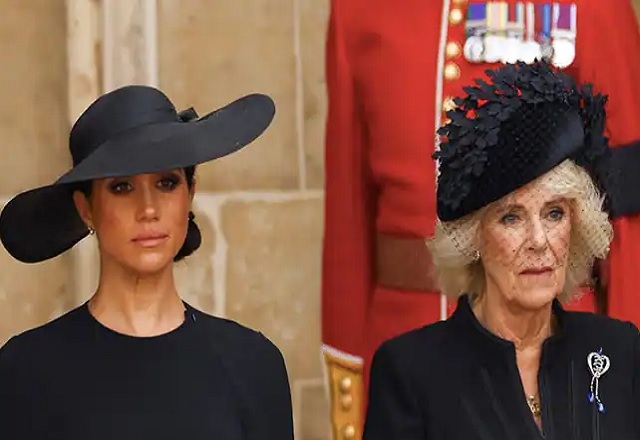 Queen Consort Camilla believes that family members should not be abandoned. Queen Consort Camilla has left the door open to reconciliation for Prince Harry and Meghan Markle, Duchess of Sussex. Royal expert and biographer Angela Levin has claimed in an interview. The royal author further said that Camilla believes that family members should not be abandoned. Ms Levin told GB News that it is important that they respect. “Harry and Meghan have got to change the way they are doing things,” she said. Ms Levin also suggested a solution for the rift. She said that Prince Harry and the Duchess of Sussex need to stop thinking about themselves. “I still think they want to crush and smash the royal family, as we knot it, to pieces.”

Ms Levin further spoke about Camilla’s approach, Ms Levin said, “I think she understands, as a parent, that you can love your child but really not like what they’re doing.” Prince Harry and the Duchess of Sussex made appearances throughout the ten-day mourning period for the late Queen Elizabeth II. Recently, the couple was demoted to last place with the Duke of York on the Royal family website. The well-known couple was ranked somewhere in the middle until the most recent upgrade to the Royal Website. This status in the royal family was above the minor members but below the senior members.

The only member of the royal family below Prince Harry and Meghan Markle is Prince Andrew. In 2020, Prince Harry and Meghan Markle made the decision to move from the UK to the US with their baby son, Archie Harrison. Both moved to California to lead a more independent life. The departure of the couple from the UK was famously known as “Megxit.” However, Prince Harry said that the term “Megxit” was a misogynistic term. He also said the word was an example of online and media hatred.