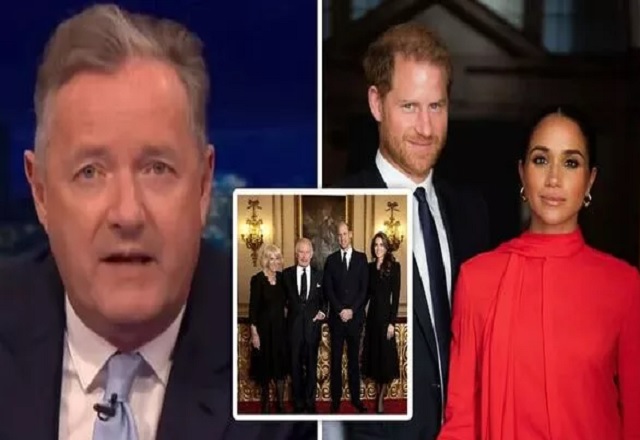 Piers Morgan has taken to his recent column to blast his nemesis Meghan Markle and her husband Prince Harry.
Piers Morgan, 57, is known for voicing his opinion on Meghan Markle, 41, and the TalkTV presenter was not letting her latest family picture go unscrutinised. The former Good Morning Britain presenter slated the Duchess of Sussex for “trying to steal the royal family’s thunder” due to their photo release happening a mere 48 hours prior. Piers exclaimed: “I’d have bet gargantuan amounts of dollars that within 48 hours of Buckingham Palace releasing a new official photograph of King Charles III, Queen Consort Camilla and the new Prince and Princess of Wales, up would pop the renegade royal grifters with an ‘official’ photo of their own.”

He then compared Prince Harry to his brother and future King, Prince William, saying the latter is the “symbol of understated royal power”. Whereas he believes Meghan and Harry to be “B-list wannabes pretending to have royal power so they can make money from it”. Piers also regularly talks about the royal couple on his TalkTV Uncensored show. Duke of Sussex was making edits to his memoir, which could be released in November. “It basically boils down to one question, is there any way back for these two?” the host asked. rightfully theirs,” Katie weighed in. “But it comes with a caveat and they have to prove they can be trusted. “And as Tom said, we’re going to have documentaries and everything in the autobiography.” “I think if they’re going to keep trashing the royal family and the monarchy, they shouldn’t have the titles,” Piers argued. “If you want to be a celebrity and make your money that way, fine, you can’t do it without royal titles.” Airing his concern for the monarch, Piers said: “He just doesn’t need the headache. “He has so many other things he has to worry about.”

This comes as Piers’ friend Sharon Osbourne admitted that she injected herself with ketamine three times whilst in therapy due to her shock The Talk Exit. The dramatic exit immediately hit headlines, as the star left the show over comments she had made about race when she defended her friend Piers Morgan. “Three days a week, I would go in for two-and-a-half hours and I would have this treatment called ketamine treatment,” she shared. “It’s something that they inject into you and it’s sort of like a truth drug.” Having been axed from her programme in America, Sharon joined Piers on his new TalkTV project, where she has been working on a show entitled The Talk UK.