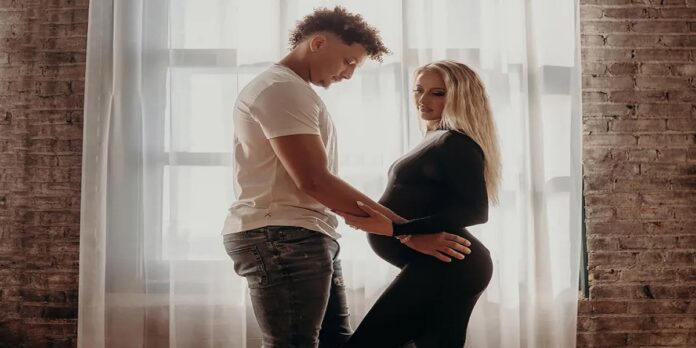 Patrick Mahomes is making sure to fulfill all of wife Brittany Mahomes’ pregnancy cravings.

Speaking on The Drive on Audacy’s 610 Sports Radio (Kansas City) this week, the NFL star, 27, recounted a recent instance where Brittany “wasn’t very happy” when her pizza delivery was taking longer than expected.

Over the weekend, Brittany, who is expecting her second baby, a son, with Patrick, was live tweeting about her pizza delivery experience, sharing that it had been over an hour and a half of waiting for her food. “Did she eventually get her pizza?” the radio host asked Mahomes.

“She got her pizza. She wasn’t very happy. [She] got it like two hours after she ordered it, and when you got the pregnant woman at home, and she’s not getting her food, she’s never going to be happy,” he shared. “I’m glad she got it eventually. We had someone run to the store and get it for her.”

On Monday, the pregnant Kansas City Current co-owner, 27, shared additional photos from her sexy maternity photo shoot where she posed only in a sheer robe and white bra as she put her baby bump on display. In the steamy shots, Brittany wore a sheer cape adorned with pearls draped over her shoulders which matched her intricately styled hair and makeup. She cradled her bump in some of the photos while she posed against a wall with her hands on her head and back for other snaps.

“As women, we are powerful. 🤍,” she captioned the pictures, which showed her among draped white fabric, with fog and fairy lights.

On her Instagram Story, the soon-to-be mom of two added that her photographer and glam team “made [her] feel so beautiful.”
Brittany Mahomes maternity photos

Brittany and Patrick, who are already parents to 20-month-old daughter, Sterling Skye, announced in May that another baby was on the way. The pair posted photos on Instagram with Sterling holding a board that read “Big sister duties coming soon,” and an additional photo holding an ultrasound picture. Patrick captioned the photo, “Round 2! 🤍”

The couple announced they would be having a boy one month later in a cute “gender reveal” photo shoot that they shared with PEOPLE. Brittany and Patrick sported sweatshirts that read “Baby Mahomes Boy or Girl” with “Boy” circled behind a poster splattered with blue paint.