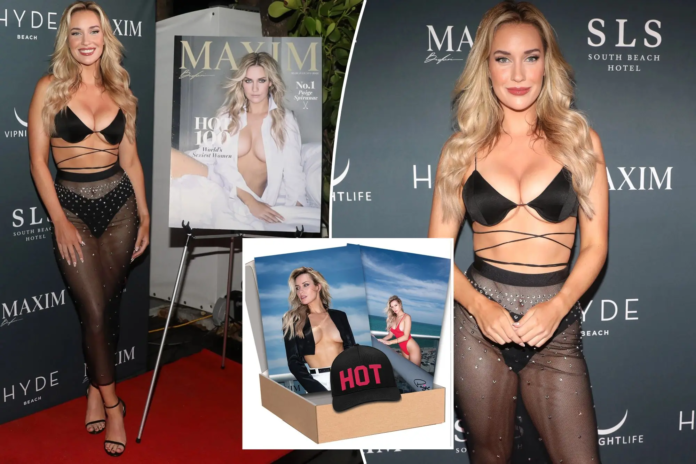 Paige Spiranac and Maxim are taking their red-hot partnership to a new level.On Thursday, the golfer-turned-influencer unveiled a special product launch commemorating her Maxim Hot 100 cover on her website, PaigeSpiranac.com, that includes T-shirts, hats, and golf accessories such as towels and head covers.“Being named the World’s Sexiest Woman by Maxim Magazine has been a huge honor,” Spiranac said in a statement. “In partnership with Maxim, I am excited to create a line of products inspired by my shoot and the concept of the Hot 100 List.” For the issue, renowned photographer Gilles Bensimon captured Spiranac posing against a dreamy, oceanfront backdrop. And while the spread itself has been online for several months, the “Playing A Round” podcast host is still in “disbelief” over the Maxim nod. “It’s so funny, my manager called me and she’s like, ‘You’re never going to believe this, but Maxim wants you to do the cover,’ and at first, it didn’t quite sink in, and then I called her back and I’m like, ‘Wait, does that mean I’m No. 1, I made it?’” Spiranac recently told The Post.“Even up to when we did the photo shoot, when the magazine came out, I’m like, I’m still in disbelief that this actually happened,” she later continued. “It’s such an honor and I still, to this day, I look at the magazine and I’m like, ‘That’s not me, I can’t believe this happened.’”

Spiranac first unveiled the Maxim news this past June on Instagram, where she expressed gratitude for the honor.“To me being sexy is about confidence and feeling comfortable in your own skin. I’ve always tried to stay true to myself though out my unconventional path and now I’m so proud to be following so many amazing women who carried the title in years before me,” she wrote at the time.Pieces from Spiranac and Maxim’s collection are available now.