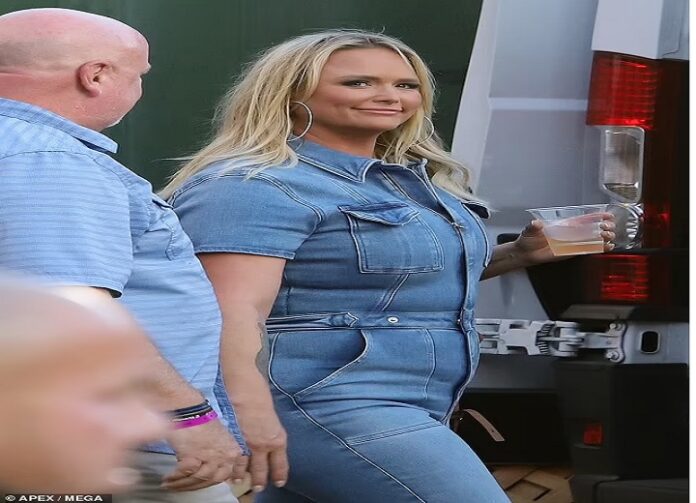 Miranda Lambert cut a casual-chic figure in an all denim outfit while arriving at a taping of Jimmy Kimmel Live! in Hollywood on Tuesday.

The 38-year-old singer–songwriter wore a striking short-sleeve denim jumpsuit as she walked up to the studio near the El Capitan Theatre.

She added a pair of white cowboy boots to the folksy ensemble with that featured gray python designs and tall black heels. The Drunk singer parted her long blonde hair in the middle, which fell down to the middle of her back.

She held hands with her husband, Brendan McLoughlin, who wore a simple white polo shirt and dark blue jeans. He walked in white sneakers, and his brown hair was gelled up and brushed up and off to the left. Lambert and McLoughlin married in 2019, four years after she and her ex-husband Blake Shelton divorced.

They met on the set of Good Morning America in November 2018 and married just two months later.

When discussing her quick, and private wedding, Lambert explained, ‘I was married before, and it was a huge wedding and everything was very public. So was my divorce. I learned then that it’s not for everybody else. This is my actual life. With Brendan, I made it a point to keep it as private as I could for as long as I could.’

Lambert’s appearance on the Jimmy Kimmel Live! came almost six months after she released her album Palomino. The If I Was A Cowboy singer released the album, her ninth, at the end of April. She also wrote 14 of the 15 songs on it.

Palomino has done well on the charts, peaking at number four on the U.S. Billboard 200 and number two on Billboard’s Top Country Albums.

‘We had this whole vision of an epic road trip with all the characters you meet along the way,’ she said when telling Cleveland.com about her creative process while making the album. ‘Since we wrote the songs for this record during a time where no one could travel, we went to visit all these places in our songs instead.’