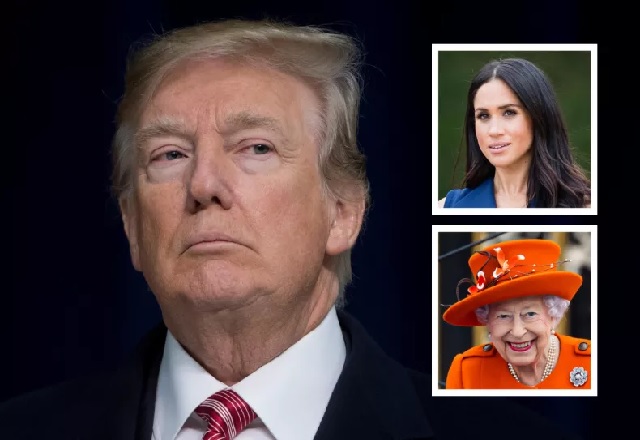 Former President Donald Trump reaffirmed his dislike for Meghan Markle in an interview for British TV on Tuesday, saying that he is “not a fan” of the duchess and that he believes she was “disrespectful to the queen” and to the “whole concept” of the monarchy.

Trump has been an outspoken critic of the Duchess of Sussex since 2019, when he learned that she had said she would move to Canada if he won the 2016 presidential election. “She said she’d move to Canada if you got elected. It turned out she moved to Britain,” Tom Newton Dunn, then the political editor of The Sun, told Trump before his state visit to Britain in 2019.

“I did not know that, no. I didn’t know that she was nasty,” the president replied. But later in the interview, Trump said he believed that Meghan would do “excellently” as a princess in the U.K. “She will be very good. I hope she does.”

In his Tuesday interview on GB News with conservative host Laurence Fox, the former president was asked what he thought of Meghan and Prince Harry as they try to build a life in the U.S. after moving to the country in 2020.

“I’m not a fan,” he said. “I was never much of a fan of her.” Trump then alluded to remarks made about Harry being dominated by his wife and referenced a sexist expression.

“You know, there’s an expression when a man is dominated by a woman,” he told Fox. “But I refuse to use that expression on your show…because your ratings will go up.”

In April, Trump told broadcaster Piers Morgan on TalkTV that “Harry is whipped. Do you know the expression ‘whipped’? I won’t use the full expression, but Harry is whipped like no person I think I’ve ever seen.”

Speaking about Harry and Meghan’s relationship, Trump told Fox, “I don’t get it.”

Asked about his thoughts on Britain’s new king, Charles III, Trump said he got to know the royal during previous visits to the country.

“I know him very well, quite well, and I spent a lot of time when I was over there as president with him and with his wife [Camilla], who is absolutely lovely by the way,” he said.

“And we had a good time together, so I’m a little prejudiced when I say it…. I think Charles is going to do very well, I think he’s got a great way about him.”

Commenting on this latest Trump interview, royal commentator Richard Fitzwilliams told Newsweek that “the phrase ‘economical with the truth’ could be coined to describe Trump. He is notorious for his ambiguities of behavior.”

Speaking about the 2019 state visit, during which the former president spent the most time with Charles, Fitzwilliams said it was “one of the most controversial ever, but the trump card during both of his trips to Britain was the queen. She hosted heads of state from Putin to Ceaușescu and undoubtedly handled him with consummate skill.”

As for Trump’s comments on Meghan and Harry, Fitzwilliams said he believes many may share his opinion, noting there has been longtime animosity between Trump and the Duchess of Sussex.

“Many would agree with his criticism of the Sussexes for being disrespectful to [the queen] and to the concept of the royal family,” he said.

“However, there has always been an intense dislike between Meghan in particular and Donald Trump. He says, ‘I’m not a fan.’ Nor, to put it mildly, is she of him. The sexist joke he shared with his host on GB News when they were discussing this sounded simply weird in today’s world.”

“It is well known that Charles and Trump had a meeting where they disagreed about climate change,” Fitzwilliams continued. “Trump’s description of their relationship, as they have met several times, is what he finds it convenient to project.”

The former president is known to have been a great admirer of the queen. After praising her in a number of interviews in recent years, he wrote an extended tribute to her after her death for the Daily Mail.

“Few in history have more fully exemplified the traits of dignity, steadfastness, resolve, duty and patriotic devotion,” he said about the monarch, who died at age 96 on September 8. Trump also wrote that “she was Great Britain at its very best.”