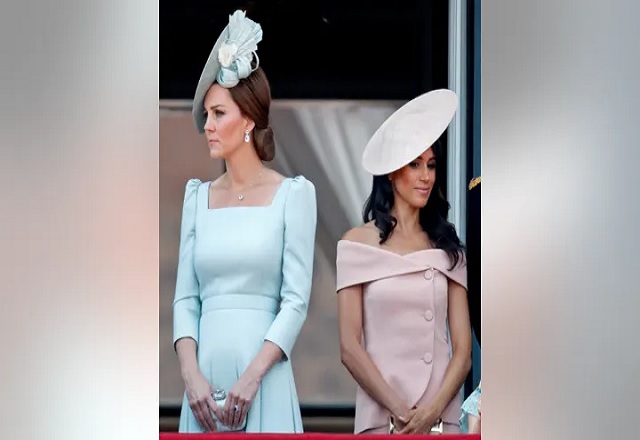 A new book is providing insight into the alleged drama between Princess of Wales Kate Middleton and Duchess of Sussex Meghan Markle.

New excerpts from royal insider Valentine Low’s new book “Courtiers: The Hidden Power Behind the Crown,” claim that Markle became “obsessed” with the palace disputing any reports of division between them.

In 2018, when Markle was preparing to marry into the royal family, British media ran rampant with the narrative that Markle had made Middleton cry at a dress fitting.

“The truth,” Low writes “is that after the dress fitting, Meghan had become obsessed with trying to persuade the palace press office to put something out denying the story,” according to excerpts obtained by Page Six. Low claims that “[The palace] were equally adamant that it would be a serious mistake to start briefing about personal stories relating to differences between members of the Royal Family,” which is why nothing was refuted. It was what Markle took particular issue with – that the media got the story wrong – and no one stepped in to correct it.

Low additionally wrote that the palace did not want to “fan the flames of the story.”

In 2021, after stepping down from their roles as senior royals, the Duke and Duchess of Sussex gave an interview to Oprah Winfrey, where Markle disputed the claims she had made her sister-in-law cry, instead claiming that it was Kate who made Meghan cry.

She told Oprah, “A few days before the wedding, she was upset about something – pertaining, yes – the issue was correct about the flower girl dresses, and it made me cry, and it really hurt my feelings.”

In another royal book, “The New Royals: Queen Elizabeth’s Legacy and the Future of the Crown,” Katie Nicholl writes that the controversy was pertaining to Middleton’s daughter, Charlotte, and her attire for the wedding. “Kate and Meghan disagreed over whether or not Charlotte should wear tights with her dress. Meghan wanted bare legs; Kate felt covered was more appropriate for her daughter on such a formal occasion.”

Markle revealed to Oprah, “I don’t think it’s fair to her to get into the details of that because she apologized…and I’ve forgiven her.” The 41-year-old said of Middleton, “She owned it and she apologized and she brought me flowers, and a note apologizing…she did what I would do if I knew that I had hurt someone.” “What was hard to get over was being blamed for something that not only I didn’t do, but that happened to me,” the American-born actress told Oprah, “And the people who were part of our wedding, going to our comms [communications] team and saying, ‘I know this didn’t happen.'”

“I think it’s really important for people to understand the truth,” Markle said of the entire debacle. “I would hope, that she [Middleton] would have wanted that corrected and maybe in the same way that the palace wouldn’t let anybody else negate it, they wouldn’t let her, because she’s a good person. I think so much of what I have seen play out is this idea of polarity, where if you love me, you don’t have to hate her. And if you love her, you don’t need to hate me.”

Today, the relationship between the sisters-in-law remains in limbo. With limited public appearances together, not to mention living in separate countries, the Middleton/Markle saga continues.