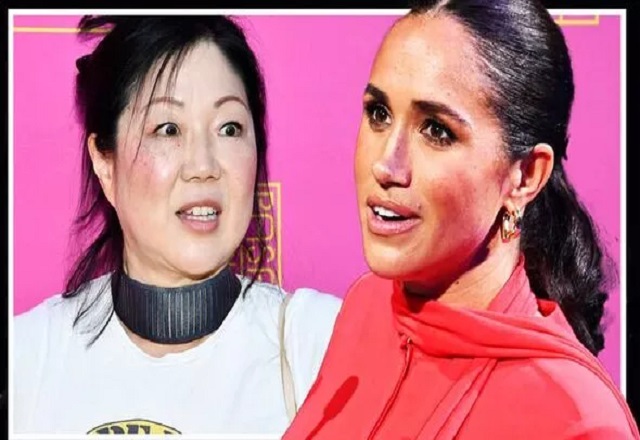 After a month-long hiatus following Queen Elizabeth II’s death on September 8, Meghan Markle’s podcast, Archetypes, is back. The fourth episode, released on Tuesday, October 4, entitled “the Demystification of Dragon Lady”, saw Meghan discuss the concept, as well as the stereotypes that “define and limit Asian women”, with comedian Margaret Cho and broadcaster Lisa Ling.

The plight Asian women often face was not realised by Meghan for “many, many years”, she said, discussing how she had enjoyed a “multitude of Asian cultures” growing up in LA.

Meghan remembered fondly how she spent her weekends visiting the Little Tokyo district, having iced teas in the Thai Town neighbourhood, and relaxing in Korean spas with her mother, Doria Ragland.

Meghan said she has had a “real love of getting to know other cultures” since she was a little girl. But when she grew up, she realised that many women of Asian descent face stigmas and archetypes for which pop culture is partly to blame.

She said: “I hadn’t known all the stigmas and archetypes that so many women of Asian descent had faced until many years later. Those terms, those ideas, those stereotypes; they weren’t familiar to me, like the ones we see in so many movies, and throughout pop culture.” Meghan hit out at two films in particular, Austin Powers and Kill Bill, for their presentation of caricatures of women of Asian descent as “oversexualised or aggressive”.

The half Chinese, half Japanese American character of O-Ren Ishii features in Quentin Tarantino’s film Kill Bill. Ishii – played by Lucy Liu – is part of the Deadly Viper Assassination Squad and beheads her victims, “collecting their heads”.

However, Liu once criticised her character being used as an example of a “Dragon lady” in an essay by writer, India Roby, titled “Hollywood Played a Role in Hypersexualising Asian Women”.

In an interview with The Washington Post last year, Liu said it did not make sense because the film “features three other female professional killers in addition to Ishii”, and concluded that she was only given the label because of her ethnicity. The term was first coined in the 1930s used to describe Asian women who were strong, sexual, deceitful and domineering with the opposite, naive archetype being known as “Madame Butterfly” or “Lotus Blossom”.

Meghan told her listeners that it was not just her who had identified these stereotypes. Her podcast guest, Ms Cho, explained that there is a Hollywood trope of Asian women having an “evil exotic force”.

The 53-year-old actress and comedian said: “‘Dragon Lady’ really comes from this fantasy of orientalism. It’s actually a character that is similar to the femme fatale. In that, a woman who is beautiful and deadly. Because we can’t just be beautiful, it has to come at a cost.

“And it’s kind of like the evil Queen adjacent but it’s also so pinned to this idea that Asiannessis an inherent threat that our foreignness is somehow [going] to get [you]. Mystery and exoticism are part of it and unfortunately, that trope has stuck to film but also to Asian American women or Asian women.” The Duchess told her listeners: “The Dragon lady, the east Asian temptress, whose mysterious foreign allure is scripted as both tantalising and deadly – this has seeped into a lot of our entertainment. But this toxic stereotyping women of Asian descent, it doesn’t just end once the credits roll.”

Meghan finished the episode by reminding her audience to “be themselves” and ignore the “loud voices from small places”.