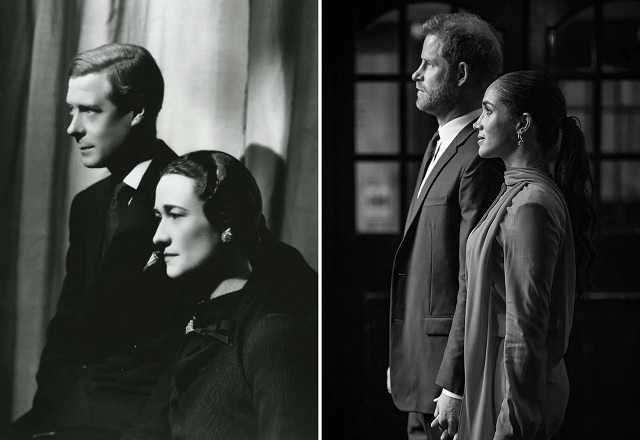 A photographer just dropped a series of unreleased photos of Meghan Markle and Prince Harry revealing the couple in intimate and stylish moments. But royal watchers were quick to point out visual similarities between Markle and Wallis Simpson, the wife of the abdicated King Edward VIII, who left the throne to marry the divorcée commoner.

A pair of photos of the Duke and Duchess of Sussex were released on Monday, and both Markle’s outfits and poses resemble those previously made by Simpson.

In one pic, Markle, 41, has her dark hair tied back into a bun and is wearing red trousers and a matching blouse by the brand Another Tomorrow.

Simpson sported a similar ensemble in 1971 — a dark-red chiffon dress with a pussy-bow-like collar. In both photos, the women wear their scarves draped over their left shoulders with the other half hanging on the left side of their blouses.

Anna Pasternak, author of “The American Duchess: The Real Wallis Simpson,” noted that the photo, shot straight on with Markle sporting a smirk not unlike Wallis’, could have been an intentional move by Markle. “The Duchess, it seems, is making a statement of firm resolution,” she writes in the Daily Mail.

The portrait of Harry, 38, and Markle was taken by friend and professional photographer Misan Harriman at the One Young World summit‘s opening ceremony in Manchester, England, in early September, days before Queen Elizabeth died.

In Harriman’s other image, Markle and Harry sweetly hold hands and stare off into the abyss. The pair are in profile, facing away from the camera, which was positioned on their left sides. While Markle is wearing the same red ensemble, the photo was released in black and white. As Pasternak points out, the image is almost an exact re-creation of a photo of Simpson and Edward, also shot from their left in black and white with their gaze focused in the distance.

It wouldn’t be the first time Markle gave a nod to former royals with her wardrobe. In the early 1980s, when the late Princess Diana was pregnant with her first son, Prince William, she donned a bright emerald-green coat. Markle rocked a sequin forest-green jacket when she was pregnant with her son, Archie.

In another instance, the former actress wore a bright red coat and a purple dress for an appearance in 2019 in the United Kingdom. In 1989, Diana paired the same colors for a visit to Hong Kong. She also wore a pink frock nearly identical to Diana’s 1987 look. Other comparisons have previously been drawn between Simpson and the “Suits” star. Both Edward and Harry married former American actresses, and the two women were also divorcées.

Harry and Markle left the royal family in 2020 and moved to California, while Edward abdicated his title of king in order to marry Simpson in 1937. They led a similarly opulent life in Paris, not unlike the Sussexes in Montecito.

Royal expert Hugo Vickers recently mentioned at the Henley Literary Festival in the UK that Harry and Edward have more similarities than previously thought, London’s Times reported. He believes “both men seemed to radiate sadness after cutting their links with the royal family.”