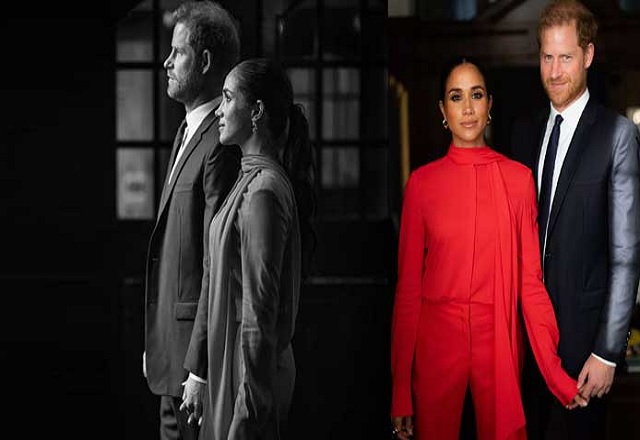 Meghan and Prince Harry’s upcoming documentary has been thrown into disarray by the Queen’s death, a Royal commentator has claimed. Some sources claim that Her Majesty’s passing has prompted the pair to “tone down” the language used in the documentary out of respect for the monarch. However, according to the Telegraph’s Royal editor Hannah Furness, the Sussexes will likely “pull no punches” in their film, specifically because the “boss” figure of the Queen is no longer around. This comes following the Queen’s State Funeral, which many have argued served to entrench rivalries between Meghan and Harry and the Royal family, rather than soothe them.

Ms Furness wrote that the Sussexes were not making a reality TV show, or a fly-on-the wall doc about their life in California.

She wrote: “They may just, however, be making the royal documentary to end all royal documentaries; the last word on the story that has captivated half the world and horrified the rest of it.”

The Royal watched noted that this was the Sussexes opportunity to control their narrative, referencing Prince Harry’s dream as a schoolboy at Eton of setting up his own newspaper to tell his own truth about the Royal family. However, the Queen’s death has created difficulties in judging how brutal the documentary should be towards the Firm.

Ms Furness said: “It was the Queen both Harry and Meghan have always publicly lauded above all others. Even a sympathetic American audience will draw the line at her being disrespected after death.” According to Page Six, the couple are now “at odds” with executives. They reportedly want to “backtrack” on what they have filmed due to the Queen’s death, which left the couple “panicked”.

The outlet claimed they were “trying to tone down even the most basic language”. The show is believed to contain a number of devastating “truth bombs” involving King Charles III and Queen Camilla, as well as Prince William and Kate, Princess of Wales.

A Netflix source told the paper: “They’ve made significant requests to walk back content they themselves have provided — to the extent that some Netflix staff believe, if granted, it will effectively shelve the project indefinitely. Netflix is standing by the filmmakers.” However, adding to the confusion, another source has insisted no such editing is going on.

They told Ms Furness: “There seems to be a big misconception that they need or want to turn the project on its head. There are always edits being made, but that’s how it works – people give notes, sometimes things are changed if there’s time before a deadline.”

Another insisted there would be “no finger-pointing”, and the show would not act as a “takedown of anyone or anything”.

A source familiar with the Netflix show told Ms Furness: “This is about where they’ve come from, what they’ve been through and where they are. I think it will explain a lot about the decisions they’ve had to make and how they’ve ended up here.” Meghan appeared to hint at some devastating bombshells in her interview with The Cut, in which she said obliquely: “I’ve never had to sign anything that restricts me from talking.”

She also emphasised her desire to “tell her own story”.

However, the show has seen a surprising lack of publicity. This, it has been hypothesised, could be part of a last minute shock-and-awe PR strategy, or perhaps uncertainty about whether the show would ever make it all the way to being aired.