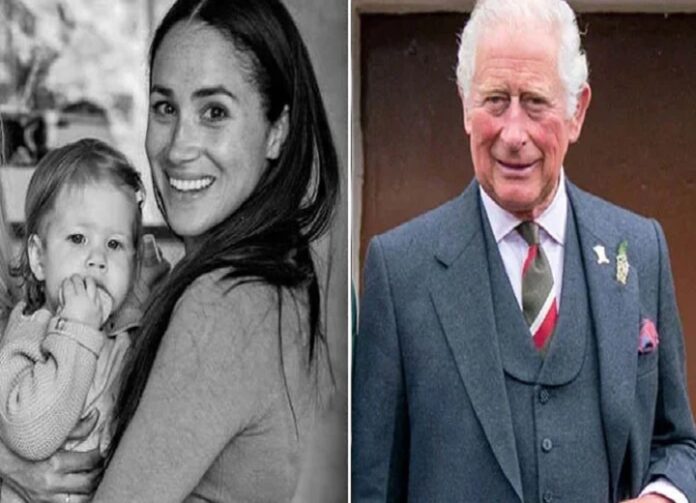 It is well known that Meghan Markle has endured a difficult relationship with her father Thomas Markle. The pair have been estranged since the Duchess of Sussex’s wedding to Prince Harry in May 2018. Thomas did not attend the royal nuptials at St George’s Chapel in Windsor, meaning that then-Prince Charles stepped in to walk his soon-to-be daughter-in-law down the aisle. And, according to a 2021 biography about the Duke and Duchess of Sussex — Charles also became a father figure for Meghan.

Omid Scobie and Carolyn Durand’s ‘Finding Freedom’ describes a close relationship between Meghan and Charles. A friend of the Duchess’ revealed that Meghan “found such a supportive and loving father in Charles, which has really changed her life for the better”.

She claimed that Meghan saw Charles not as a father-in-law, but a “second father”.

The now-King was said to be fond of his daughter-in-law, with a friend of the monarch’s saying he had “taken a real shine to Meghan”.

Back in November 2016, when Meghan and Harry had been dating for a few months, it was reported that Charles had already met the former Hollywood actress. According to Us Weekly, the meeting “went really well,” and “everyone loved Meghan”. Just a year later, the couple announced their engagement. Charles released a statement via Clarence House saying he was “delighted” by the betrothal.

Charles’ nickname for Meghan reflects the qualities he apparently admired. In her new book ‘The New Royals’, royal expert Katie Nicholl revealed Charles had nicknamed Meghan ‘Tungsten’, nodding to her toughness and resilience.

According to Ms Nicholl, the nickname came about after her and Harry’s 2018 appearance with Prince William and Princess Kate at the Royal Foundation Forum. She wrote: “It was, according to one aide, the moment William and Kate, who was heavily pregnant, realized they needed to up their game. “The Cambridges [now the Prince and Princess of Wales] had already signalled their intention to be more than ‘ornamental royals’ and had, along with Harry, made a huge success of their mental health campaign Heads Together.”

Ms Nicholl continued: “But Meghan was the breakout star of the foursome. She was polished, passionate and funny, using all her TV-honed skills to present her case. That was a wake-up moment for William and Kate when they realised that Meghan was very impressive, very confident and very capable, according to a source.”

According to ‘Finding Freedom’, Meghan’s past as an actress also helped her bond with the former Prince of Wales. While studying at Cambridge University, Charles was involved in the Dryden Society, Trinity College’s drama group; he was known to appear in sketches and revues, and even wrote some of his own material.

A source told the authors: “The Prince of Wales has always been fond of people from the Arts, like Emma Thompson, who he’s been mates with for years.” They added: “Meghan ticks the boxes. Most of all she’s married to [Charles’s] beloved youngest son and made him whole. Charles takes enormous delight and pleasure in that.”

However, in the years after Meghan and Harry’s wedding, relationships within the Royal Family became increasingly strained. It wouldn’t be long before the Duke and Duchess of Sussex decided to step down from their roles within the Firm and move overseas.

In 2020, the couple announced that they were taking a step back and relocating to the US. Later, they sat down for a tell-all interview with Oprah Winfrey and cast a negative light on the Royal Family.

Relations between the Sussexes and King Charles have been under the spotlight since the couple’s exit and subsequent media interviews. It wasn’t until Meghan and Harry travelled to London in June 2022 for Queen Elizabeth II’s Platinum Jubilee that King Charles met his granddaughter, Lilibet Diana.

According to reports at the time, Charles put any strife he may have had with the Sussexes aside and enjoyed what was described as an “emotional” meeting with his granddaughter and grandson, Archie Harrison.