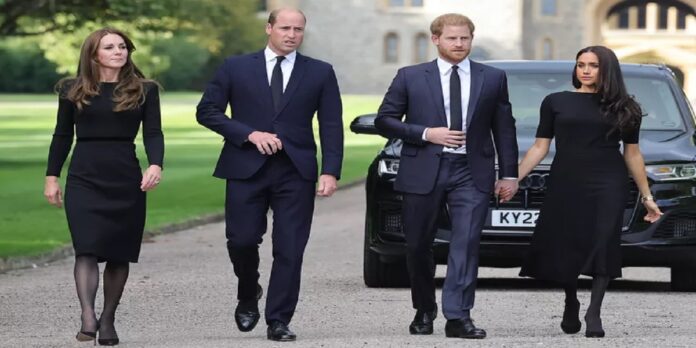 Is a royal reunion on the calendar for Prince William, Kate Middleton, Prince Harry and Meghan Markle?

Though both couples will be in the northeastern United States in the next few days, a meetup is unlikely. The Prince and Princess of Wales, both 40, will touch down in Boston Wednesday ahead of Prince William’s second annual Earthshot Prize Awards Ceremony on Friday. Four days later — on Dec. 6 — the Duke and Duchess of Sussex are set to attend a gala in New York City to accept an award.

Prince William and Princess Kate’s trip to America is their first in eight years. The royals most recently visited NYC in 2014. Looking ahead to their transatlantic trip, an aide says that highlighting and championing the Earthshot Prize is William and Kate’s main focus, “and we won’t be distracted by other things.”

Both Prince William’s and Prince Harry’s visits have connections to the Kennedys. Prince William’s environmental Earthshot Prize was inspired by President John F. Kennedy’s iconic Moonshot mission, and Boston was selected as the host city for the second annual awards ceremony in connection with its history as Kennedy’s birthplace. The Prince of Wales will visit the John F. Kennedy Presidential Library and Museum with President Kennedy’s daughter Ambassador Caroline Kennedy during the U.S. trip.

Meanwhile, Harry, 38, and Meghan, 41, are being honored by Robert F. Kennedy Human Rights, the non-profit named after President Kennedy’s younger brother and former U.S. attorney general. The Sussexes are set to receive the Robert F. Kennedy Ripple of Hope Award at the New York City gala.

The organization chose the California couple as this year’s Ripple of Hope laureates for their work in racial justice, mental health and other social impact initiatives through their Archewell Foundation. Ukrainian President Volodymyr Zelenskyy is also receiving the Ripple of Hope Award for his courageous leadership amid the Russian invasion. Previous Ripple of Hope prizewinners include Dr. Anthony Fauci, Colin Kaepernick, Nancy Pelosi, former President Barack Obama and President Joe Biden.

The Duke and Duchess of Sussex are expected at the annual Ripple of Hope Award Gala in Manhattan next Tuesday. The event is being emceed by Alec Baldwin.

It will be a cross-country trip for Harry and Meghan, who relocated to the U.S. after stepping down from their royal roles in March 2020. The couple bought a home in Montecito, California that summer, where they live with their son Archie Harrison, 3, and Lilibet Diana, 1.

Prince William, Kate, Prince Harry and Meghan were most recently photographed together at the funerary events for Queen Elizabeth II in September. The couples stepped out together on Sept. 10, walking outside Windsor Castle to greet well-wishers and view the tributes left for the late monarch.

Kensington Palace said at the time that William invited Harry and Meghan to join him and Kate. Another source added that security was not expecting both couples.

Prince William thought the walkabout to greet the crowds “was an important show of unity at an incredibly difficult time for the family,” a royal source previously told PEOPLE.

Added a palace insider, “It’s such an extraordinary historical moment and also a deeply personal one for the family that you’d hope and think that all members of the family would unite and support [King Charles III] especially. And perhaps some of those wounds can be healed in the process.”