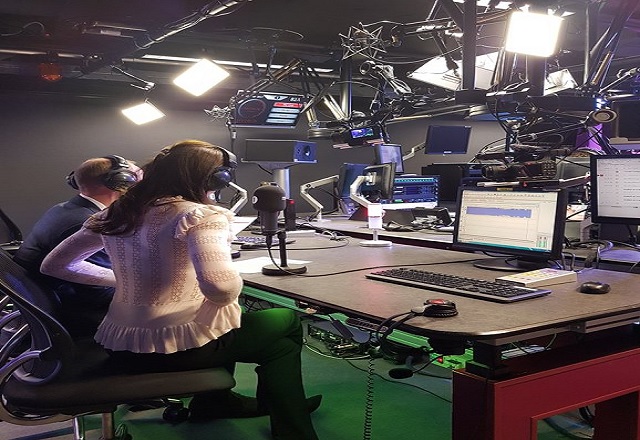 The Prince and Princess of Wales are taking over a youth-focused news show to discuss the importance of mental health. Prince William and Kate Middleton are taking over the airwaves! The new Prince and Princess of Wales, both 40, are lending their voices to BBC Radio 1, recording an episode of the program Newsbeat in honor of World Mental Health Day. The royal couple’s show takeover was recorded Monday, and will be released tomorrow. In a snippet that hit social media, the youth-focused radio show teased “a very special program with two very special reporters,” before the royals were introduced to the tune of “Late Night Talking” by Harry Styles.

“Hello Newsbeat,” Princess Kate said.
“Hi, Newsbeat,” echoed Prince William. Taking the mic again, his wife joked, “Yes, Newsbeat will sound slightly different. “As part of World Mental Health Day, Catherine and I have recorded a special program, taking over the radio to talk about the importance of mental health,” the Prince of Wales explained. “A lot of people don’t realize what they need until it actually comes along. You can be living one life one minute, and something massive changes, and you don’t necessarily have the tools or the experience to be able to tackle that,” William said of getting the right help. Later in the clip, Kate asked an open-ended question to kick off a relatable conversation. “I’d love to know, and maybe the listeners also will be interested as well, how do you as individuals look after your mental health?” she asked. In reply, a guest told her that the most important thing for them was being “aware” of their mental wellness. “Not every day is going to be roses and sunflowers. I know some days I’m going to have to push against the clouds to see that sun again,” the man said. “You can’t always run away from it, sometimes you have to really face and conquer them. With practice, there’s progress.” Agreeing with the idea of taking it day by day, Kate replied, “There’s no right or wrong — that’s the thing as well. Different things work for different people.”

Listeners can look forward to hearing the senior royals lead a discussion on youth and mental health in honor of World Mental Health Day, celebrated internationally on Monday this year. As special hosts of Newsbeat, William and Kate will dig into the challenges and opportunities unique to young people when it comes to caring for mental wellbeing, chatting with experts and advocates about mental health today. A cause close to their hearts, the Prince and Princess of Wales previously appeared on BBC Radio 1 in April 2017, surprising DJ Adele Roberts, who was running the London Marathon for the royals’ Heads Together initiative that year.

The Duke & Duchess have just got time to pre-record the @BBCR1 official chart show rundown with @gregjames – which you can listen to later. pic.twitter.com/Qzr4Jl1alo


The royal couple has long been dedicated to the cause of mental health, launching the Heads Together initiative in 2016 to smash stigmas surrounding conversations and help mental health. Leaning into the popularity of the U.K.’s favorite sport, Heads Together teamed with the Football Association (English soccer’s governing body) to launch the Heads Up campaign in 2019, which uses the sport to segue into discussions on mental wellness. William and Kate continued to spread the message during the pandemic, from leading a star-studded broadcast during Mental Health Awareness Week to visiting children’s centers and checking in on healthcare workers last year to show support. As the royals rise in rank as the new Prince and Princess of Wales, they remain as dedicated as ever to the important cause.