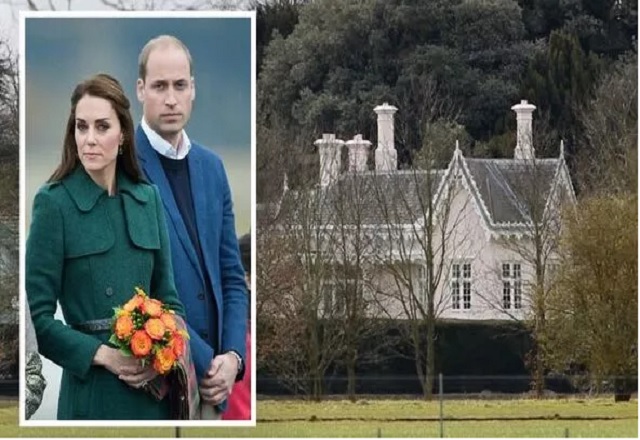 Kate Middleton and Prince William privately own Anmer Hall in Norfolk and previously used Kensington Palace as their home during term time so their children could attend Thomas’s School in London. However, the Prince and Princess of Wales moved their family to Adelaide Cottage on the Windsor estate over the summer. Royal experts Roberta Fiorito and Rachel Bowie, who run the podcast Royally Obsessed, spoke about the royal move on their podcast.

The hosts said: “They’re moving into Adelaide cottage which is such a downsize.

“It’s supposed to be almost like a little schoolhouse, so it’s really unprecedented that they’re making this choice.”

The home was previously occupied by Peter Townsend, the lover of Princess Margaret during the 1950s whom she was unable to marry due to his divorced status. Adelaide Cottage is a grace and favour property that the monarch can bestow on whomever they want.

The hosts added: “I love the past history of the house, with the Princess Margaret tie in there.”

Why has this move by William and Kate caused some controversy?

The experts explained: “There is a lot of uproar because Robert Jobson was saying that the Waleses had £12million worth of renovations done to Kensington Palace 1A to make it family-oriented and livable for them and their kids. “The promise was that they’d be there for the long haul.”

However, Kate and William will keep Kensington Palace as a home, despite it being no longer their primary residence.

The hosts commented: “It’s right next to Frogmore Cottage, so if Meghan and Harry are there there’s going to be some tension!”

Reportedly, this move by the Waleses was “expected to significantly change the dynamic at Windsor where the Duke of York had the most contact with the late Queen,” according to The Telegraph. Prince Andrew currently lives at Royal Lodge on the Windsor estate, whilst other royals like Sophie, Countess of Wessex live in Windsor too.

It has also been reported that the Waleses would move into Windsor Castle once King Charles became monarch, however there are no talks of that happening as of now.

Therefore the move to Adelaide Cottage made sense as the children will not have to abruptly change school if that move ever happens. Kensington Palace is a city location, which means that the Waleses were limited in terms of their ground space.

The hosts of the podcast added: “But to have three furnished homes, I think the taxpayers are a little miffed about this.”

King Charles, on the other hand, has 11 residencies he can now call home as he is the monarch.