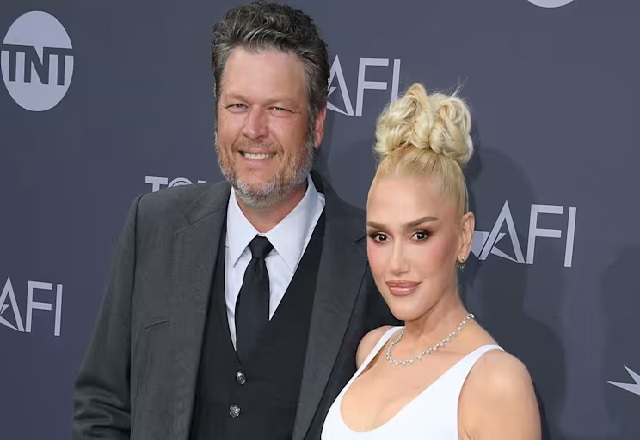 Gwen Stefani and Blake Shelton have been living in wedded bliss for over a year now so have already experience many firsts as husband and wife.

However, back in November 2021, the No Doubt singer took to Instagram to give fans a peek inside the new marital home she and Blake had custom-built in Tishomingo, Oklahoma, as they prepared to celebrate their first Thanksgiving as newlyweds.

Gwen shared several photos of their holiday preparations and revealed a delicious-looking bacon-wrapped turkey prepared by Blake and her son Apollo.

What really caught our eye at the time were the thoughtful touches scattered around their new home. In one image, Gwen revealed that the couple have their initials, “B&G”, framed in a huge neon light that takes center stage on a white paneled wall with a dark wooden bench sitting underneath.

The walls leading up to the first floor are also white paneled and feature two giant 3D neon pieces of art. One shows a cowgirl sitting on the floor with her legs crossed and one knee in constant motion, while the other is slightly larger and is of a cowboy posing with his hands in his pockets.

Gwen also shared two adorable childhood photos of herself and Blake – and both of them are dressed as cowboys! The singer later took to her Instagram Stories where she revealed the outside of the property, which looks like the perfect spot to host their extended family during the holidays.

While Blake and Apollo were busy dealing with the turkey, Gwen inadvertently revealed that the kitchen has floor-to-ceiling windows and leads out onto a beautiful patio kitted out with tables and chairs.

The swimming pool is down a level in the garden and is built into the ground with white bricks, which is also the theme of their outside entertaining area. The lakefront abode boasts a bevy of chimneys and dormer windows, and a sprawling driveway lined with trees.

Gwen revealed at the time that their trip back marked the first time they had returned to Oklahoma since their July wedding – and their first Thanksgiving in a new house as a married couple.

“We leave next week to go to Oklahoma, it’s a tradition. My whole family flies out, and we have not been back there since the wedding,” she recently told ET.

“We have a new house there. We have, like, a new life there. So it’s gonna be our first married Thanksgiving! Very grateful, very excited.”