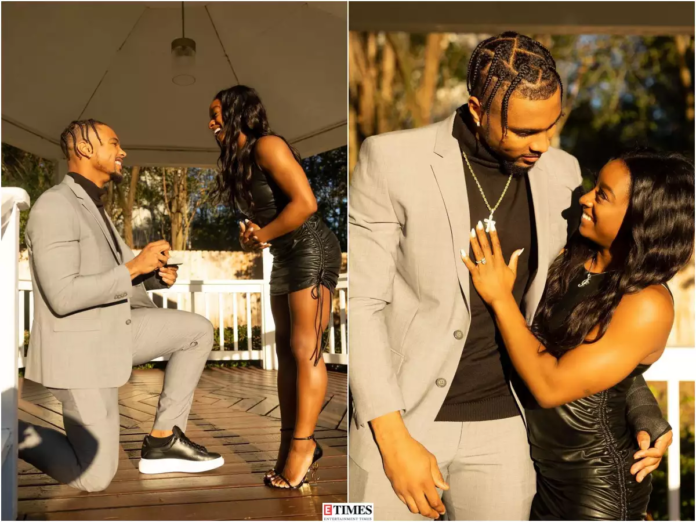 Earlier this year, Simone Biles surprised her fans in February when she announced her engagement. Simone has been dating NFL star player Jonathan Owens for over two years. The pair formalized their relationship on Valentine’s eve. When football player Jonathan went down on his knees to ask Biles the most crucial question, Biles had the loudest ‘yes’ for the answer.It elated the fans when the couple announced their engagement on the social media platform. Since then, friends, family, and fans eagerly await their big day. As the official date remains under wrap, Simone shares a sneak peek at her wedding preparation.
Simone and Jonathan get their wedding photographer a special gift Sometime back, Rachel Taylor from Rae Tay Photography posted two stories on their official Instagram page. While one featured a boomerang where Simone and Jonathan posed alongside Rachel and Cakewalk films, the second story featured a still. The second story featuring the young couple caught the fan’s attention.The adorable image had a caption that read, “The most thoughtful gift for our baby boy.” It turns out that Simone and her fiance Jonathan got the expecting mother, Rachel, a couple of baby garments. As apparent, they highlighted the gifts in the story. Simone and Rachel were holding the dress while Jonathan was smiling from behind.

Rachel shared more information with a fun boomerang video of all four with a caption that read, “That’s a wrap on Simone & Jonathan’s engagements!” Simone is yet to reveal her wedding date. But going through her Instagram stories, we can safely assume that their marriage might happen before the 2023 NFL season.As the big day is coming near, the work list keeps getting extended. Some days back, Simone Biles asked for help from her 6.7 million followers. Sharing one more story on her Instagram, she wrote, “Hey guys… I’m looking for wedding invitation companies.”In the said post, she also clarified that she was looking for companies that were “preferably in Houston/spring area” and were “Black-owned or woman-owned.” Urging fans to help, she informed them about the “need to get started asap.” Whether Biles got in touch with a wedding invitation company remains unclear. However, it is evident that she is leaving no stone unturned for her Big day.