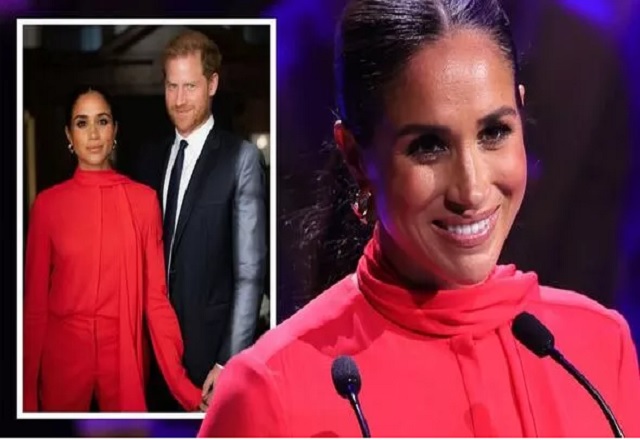 This Morning presenters Holly Willoughby and Phillip Schofield were joined by Matthew Wright and Marverine Cole to discuss the latest news and headlines. One topic of discussion was the stunning behind-the-scenes images of the Duke and Duchess of Sussex from the One Young World Summit. Meghan Markle and Prince Harry have been slammed for releasing the images just days after Buckingham Palace shared a snap of King Charles III, Queen Consort Camilla and the Prince and Princess of Wales. But Holly rushed to their defence, insisting there is room for everyone to “shine”.

In the images, the couple can be seen holding hands at the One Young World summit for youth leaders in Manchester last month.

Meghan can be seen in an all red outfit while Harry is in a suit beside her.

The second was a black and white image of the couple standing united and looking out at the event.

Celebrity photographer Misan, director of the Southbank Centre and a friend of the couple captured the special moment between the couple. Misan captioned the images on Instagram: “The Duke & Duchess of Sussex moments before attending the opening ceremony of @OneYoungWorld last month.”

The photos of Meghan and Harry sparked a backlash with many claiming it overshadowed the images of the King and Queen Consort.

Taking to Twitter to disagree with the decision to release the images, @ConellaCharms wrote: “Funny how the images were released when King Charles and Camilla do their first public appearance.”

@PrincePointer99 agreed: “King Charles and Camilla first time out since the funeral and Meghan and Harry release two images? Bitter much.” Marian Wits fumed: “Of course they had to pop up. Can’t just go back to the US and stay quiet whilst Charles gets his feet on the ground!”

However, not all views of the image release were negative, as Jane Minors praised: “Stunning photos of the pair. Leave them be, it’s a picture for crying out loud.”

@Sassysims added: “When a picture causes so much drama. It’s a picture guys get a grip. No matter what they did next you were going to have an issue with it.” (sic)

Commenting on the furore, Holly stated: “It came two days after the publication of the new King’s picture with Camilla, William and Kate, so the new fab four kind of pushing Meghan and Harry outside. “This was from the One Young World Summit and people are saying ‘Oh, they put the photo out and it has really taken the light off them.’ I don’t think the picture is that bad.”

Marverine added: “I mean, that is what people will say because there is an army of people who hate Harry and Meghan with a vengeance, they will never stop.

“Many people know exactly who they are, they are very vocal on social media as well, but for anyone who is right-minded, will go ‘It is another fantastic photo’.”

Holly interjected: “And a fantastic doing a really important job.” Agreeing with her point, Marverine continued: “Thank you! Following their ethos of wanting to help, and it is a stunning photo!”

Defending the image, Holly quipped: “Also, there is this idea that there is only one limelight and they can’t have it at any one time. There is enough light out there for them all to shine.”